An Interview with Christopher Magee

“The phone represents human communication for many people, and putting a face on it makes it seem more like actual human contact. I guess it could be interesting to think that lots of people may be more in love with their cell phones than with the people they use them to communicate with!”

SCHAU INS BLAU: A lonely guy is sitting in his apartment and waiting for his cell phone to ring. But it’s not a normal cell phone; it looks like the face of a woman who just went by right in front of his house. She was talking on this phone that looks like her when she ran into a guy talking on a phone that looked like him. It seems as if they had exchanged their phones. But in this moment the camera is zooming away from the two persons and up the building to the window and into the flat where the lonely guy is sitting and waiting for his phone to ring. What did happen in this strange moment? Is the guy, who is sitting in the flat, the same guy as the one who went by down on the street? And how did he get the woman-phone? Do they even know each other? Those questions arise right in the beginning of the video, and they are not answered, they seem to cause the confusion that is necessary to guarantee the openness of meanings of the video…?

CHRIS MAGEE: This is an interesting interpretation, however I was not thinking with such complexity, and the characters look like they might be related because the designs are simple and similar, that’s all. The movement of the pedestrians towards each other is just a way to allow the camera to start its pan up the building. The idea of the woman-phone comes from the idea that we are talking to people when we talk on the phone, and why not personify the phone itself to represent that.

SCHAU INS BLAU: But isn’t the point the relationship between the man and the woman-phone? I was wondering whether the guy desires the cell phone or the women; and if he perhaps projects his desire for the woman on the phone?

CHRIS MAGEE: The guy desires communication – human contact. The phone represents human communication for many people, and putting a face on it makes it seem more like actual human contact. I guess it could be interesting to think that lots of people may be more in love with their cell phones than with the people they use them to communicate with! In this case, the lonely guy sees people connecting via their cell phones, whereas his has been stubbornly quiet for some time. He does probably desire a woman – women may symbolize connection to humanity, as women are often more connected and more social than men.

SCHAU INS BLAU: Well, I had the impression that he is also driven by the will to decide on her? For me that seemed like a typical male desire…

CHRIS MAGEE: Oh actually, as I mentioned, he seeks human contact because his world is sterile and an empty space: he’s lonely. He is unhappy because of that, or at least he thinks so. I think most people want to connect with others, because we are social creatures. So it’s not so much a ‘typical male desire’ as a more generalized human one, experienced as a man.

SCHAU INS BLAU: But his desire, whether for communication or for the women, is torpedoed when the nice, woman-like phone turns into a screaming and screeching fury. I was apt to read this as the revenge of the female on male desire…

CHRIS MAGEE: The transformation into an obnoxious “fury” is sudden – rather too sudden, when I look at the construction of the film. The idea is that he is initially very happy to have contact, that this goes on for a while – you meet someone, you get to know them, you agree, you complain together about people and things, you feel you have a certain complicity, that someone understands you, and then they say something that doesn’t make sense to you. This contradiction is all the more shocking because you have grown to trust them and to feel that they understand you and reflect your way of perceiving the world. They go from being on your side to being against you (such is one aspect of close relationships) because of the investment you have made and the assumptions that lull one into complacency and dependency.

SCHAU INS BLAU: You said, the guy suffers from his loneliness. Is the cell phone the only connection to the outside world for him, a world which has become strange?

CHRIS MAGEE: Basically yes, it is his only connection, especially in the film. He lives way up in the building, away from the street where people walk and talk, observing them, hoping for the same thing. I don’t know if the world is any stranger in the middle of the film than it is in the beginning. What interested me was the idea of the tension between the desire to communicate and the desire to escape communication or intimacy: never happy either way, always wanting to be either closer or further away from people or persons. That is the theme of the larger film from which this short has been pulled. It’s called “SoFarTooClose”, and I’m starting to work on it now.

SCHAU INS BLAU: This is a really important and interesting aspect: the tension between the desire to communicate and the fear to lose control in communication. In some way you always depend on your dialog partner. Perhaps there is something even more scary about communicating by cell phone because you never now what‘s really going on the other end of the line?

CHRIS MAGEE: I can’t say I had this idea in mind, although it’s interesting, especially as it connects to the idea that seeing someone’s face allows you to read whether they are telling the truth or not.

SCHAU INS BLAU: In the case of your film the guy finally wants to escape communication, but he cannot. Through the cell phone the threat is coming directly into his flat, so that he even tries to hide behind the sofa in his own apartment. Is he sort of defenseless on the background of the risky aspect of communication?

CHRIS MAGEE: Well, the cell phone’s “noise” – the consciousness that invades the guy’s mind, is so loud that he can’t escape – like a bad dream, or perhaps more like a bad “trip”. The intimacy that at first seemed such a balm has turned into a claustrophobic straitjacket.

SCHAU INS BLAU: I was thinking of Goethe’s “The Sorcerer’s Apprentice” and the line, “die Geister die ich rief, werd ich nun nicht mehr los” (Spirits that I’ve cited/ My commands ignore). Is the man in the video kind of a postmodern sorcerer’s apprentice who is calling the spirits of technique and the spirits of sexual desire?

CHRIS MAGEE: That’s interesting, and I would never have thought of it! I guess it’s true that he discovers he is not in control of the degree or quality of the communication, the connection that he sought after and then found. The lack of control that accompanies the helplessness of loneliness transforms itself into the lack of control over an interaction with someone else.

SCHAU INS BLAU: The lack of control is reflected in the sound, the scary sound of the phone that the guy cannot escape. People in your animation video do not speak at all, but the different sounds seem to be important for the story. Thus, what role does the music play in your animations?

CHRIS MAGEE: I worked with a composer who had just graduated from the University of the Arts, here in Philadelphia. In the past I have created the music for most of my films, but these have been songs rather than soundtrack music, which I can’t write. So I hired Nathan Cooke to come up with music that would act as dramatic support to the events in the film, to reflect mood and tension in a classical sense.

SCHAU INS BLAU: Moreover, the fact that the people do not speak at all in your animation movie causes an effect of alienation. Neither what we hear nor what we see connects to “reality”. Could you therefore say that the effect of alienation in animation is intensified because the viewer realizes that there is no “real” continual motion, but that everything is rather made up of single drawings?

CHRIS MAGEE: I don’t know to what degree everyone is aware of that, but I do think that animation, especially when it makes no pretention to portray “reality”, and in fact does the reverse (i.e. makes its artifice clearly visible) allows the viewer to take a step (or two) away from reality and then see the underlying meaning. Especially in a short we need to say what we’re going to say in a dense manner, like poetry. The fact that we know that we are watching something that is so obviously not real allows us to focus on the meaning of our actions and behaviour by taking us away from the immediacy and distraction of reality and into the timelessness of metaphor and the subconscious.

SCHAU INS BLAU: Not to be bound to reality opens up a lot of possibilities. In animation you seem to be even free to play with categories like time and space, are you?

CHRIS MAGEE: Even though “Cell Phone” is pretty prosaic in its use of time and space, my aim in making these little films is to create a self-complete idea whose message exists out of time. The effect of a good pop song lasts much longer than the pop song itself. It’s almost more the idea of the song rather than the song in its actual duration, which is very short, that is important – same for animated shorts, for me, anyway.

SCHAU INS BLAU: Thank you, Chris, for answering all those questions.

CHRIS MAGEE: Thank you! Answering your questions helped me to articulate a few of the concerns I had while attempting to shape the story. This is a useful and enlightening aspect of the whole process for me. 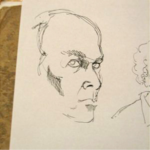 Christopher Magee grew up in Hawaii. He studied music and animation in school, and currently teaches animation at the University of the Arts in Philadelphia, USA. He has made two festival films, “The Birdcage King” and “Cell Phone”, and has ideas in his head for more films.

Man is a storytelling animal